A rare find: a loggerhead turtle on the Cape Whale Coast

A rare sighting on a guided walk on the Perlemoen Trail in Jessie’s Bay Quoin Point Reserve. 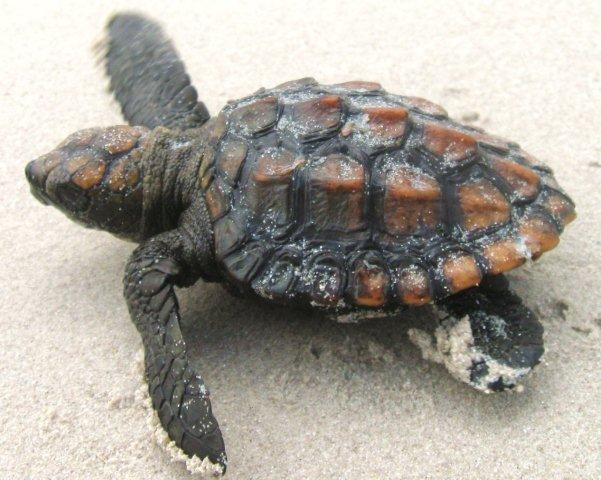 Loggerheads are considered an endangered species and are protected by the International Union for the Conservation of Nature.
Loggerhead sea turtles spend most of their lives in the open ocean and in shallow coastal waters. They rarely come ashore, with the exception of the females’ brief visits to construct nests and deposit eggs. Hatchling loggerhead turtles live in floating mats of Sargassum algae. Adults and juveniles live along the continental shelf, as well as in shallow coastal estuaries.

Loggerheads occupy waters with surface temperatures ranging from 13.3–28 °C  Very few loggerheads are found along the European and African coastlines.

The loggerhead sea turtle is the world’s largest hard-shelled turtle. Adult loggerheads have an average weight range of 80 to 200 kilograms

The loggerhead takes on a floating, cold-stunned posture when temperatures drop to approximately 10 °C  However, younger loggerheads are more resistant to cold and do not become stunned until temperatures drop below 9 °C
The loggerhead sea turtle is omnivorous, feeding mainly on bottom-dwelling invertebrates, such as gastropods, bivalves, and decapods. The loggerhead has a greater list of known prey than any other sea turtle.
Once in the ocean, hatchlings swim for about 20 hours, bringing them far offshore.An iron compound, magnetite, in their brains allows the turtles to perceive the Earth’s magnetic field, for navigation. Many hatchlings use Sargassumin the open ocean as protection until they reach 45 centimeters  Hatchling loggerheads live in this pelagic environment until they reach juvenile age, and then they migrate to nearshore waters.
Female loggerheads first reproduce between the ages of 17 and 33 years
Loggerhead sea turtles were once intensively hunted for their meat and eggs; consumption has decreased, however, due to worldwide legislation.Fishing gear is the biggest threat to loggerheads in the open ocean. They often become entangled in longlines or gillnets.
Loggerhead sea turtles are classified as endangered by the International Union for the Conservation of Nature.
This little guy must have come down with the Agulhas current, and should have been collected and sent to the Two Oceans Aquarium for rehabilitation.  Will do next time.
http://en.wikipedia.org/wiki/Loggerhead_sea_turtle
Facebook Youtube Tripadvisor
PrevPreviousThe amazing limpets of South Africa
NextRock pools – is this where life began?Next