The presence of frogs is an indicator of a pristine environment due to their partial respiration through the skin which causes an accumulation of any toxins present thus killing the frog.

Fifteen amphibian species are found in the area, with the highly endangered Cape Platanna and Micro frog having been recorded from seasonal vleis in the Hagelkraal and Ratel River catchments (Ref De Villiers 1988;  Picker & De Villiers 1988).

Most of these frogs breed in water such as fynbos seeps, marshes, mountain streams, rivers, coastal lakes and pans. Only three species do not depend on wetland or other aquatic habitats the sand rain frog occurring in flat sandy areas the cape mountain rain frog and the Strawberry rain frog both depending on montane habitats. Rain frogs have squat rounded bodies, flat faces and short stumpy limbs and spend most of their lives underground. Breeding after rain when the ground is moist.

Included in the variety are some of the smallest, largest and most attractive species in southern Africa (Ref Atherton de Villiers herpetologist Cape nature Stellenbosch)

The Arum lily frog sometimes hides in the Arum lily flower in the daytime often using cryptic colouration to blend in with its environment while at night creeps down the stem to hunt insects. 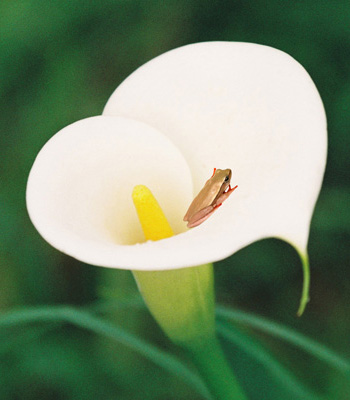