Many Pelagic species (Open Ocean) are washed ashore. Often found in the intertidal zones on almost every walk. Colouration of these animals is the first clue to there normal habitat, either blue, silver, clear or counter shaded this is because there is nowhere to hide in the surface waters of the ocean.

Often found washed ashore (this one upside down) are Root-mouthed jellyfish Eupilema inexpectata although able to swim by pulsing water from there bells, onshore winds and currents overwhelm them. All jellyfish are carnivores stunning prey with stinging cells on there tentacles, the Root-mouth lacks tentacles and feeds by filtering tiny prey through tiny pores in the manubrium. Jelly fish are an important food for some turtles and are even eaten by Great white sharks. The small brown flecks seen in the photo are parasitic Amphipod’s. 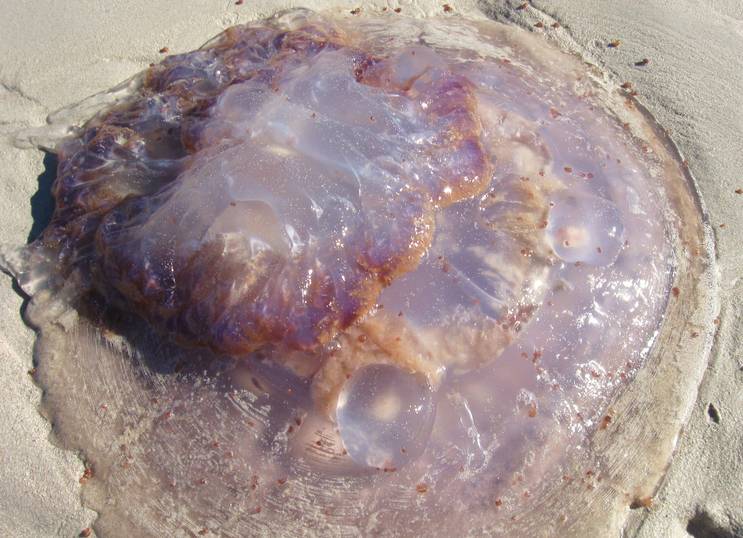 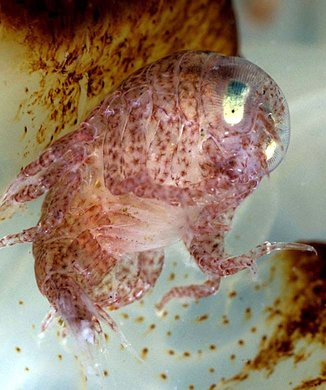 Amphipods are small (a few mm long) but diverse and abundant in most marine habitats occupying seaweeds, burrowing in sediment many building tubes. This Amphipod Hyperia galba  is parasitic seen living inside the root-mouth jellyfish above. They are always associated with one or other of the species of jellyfish, living under the shelter of the umbrella often within the gonad cavities, where they are sought by some species of fish.Sometimes, you will see coastal birds picking at beached jellyfish, in search of an easy protein rich meal.

By-the-wind sailor Velella velella comprises of an oval float carrying a kinked vertical sail the mouth is located underneath surrounded by a number of simple
tentacles with stinging cells (harmless to humans) used to stun and capture planktonic animals. This hydrozoa floats on surface water tension driven by the prevailing winds. 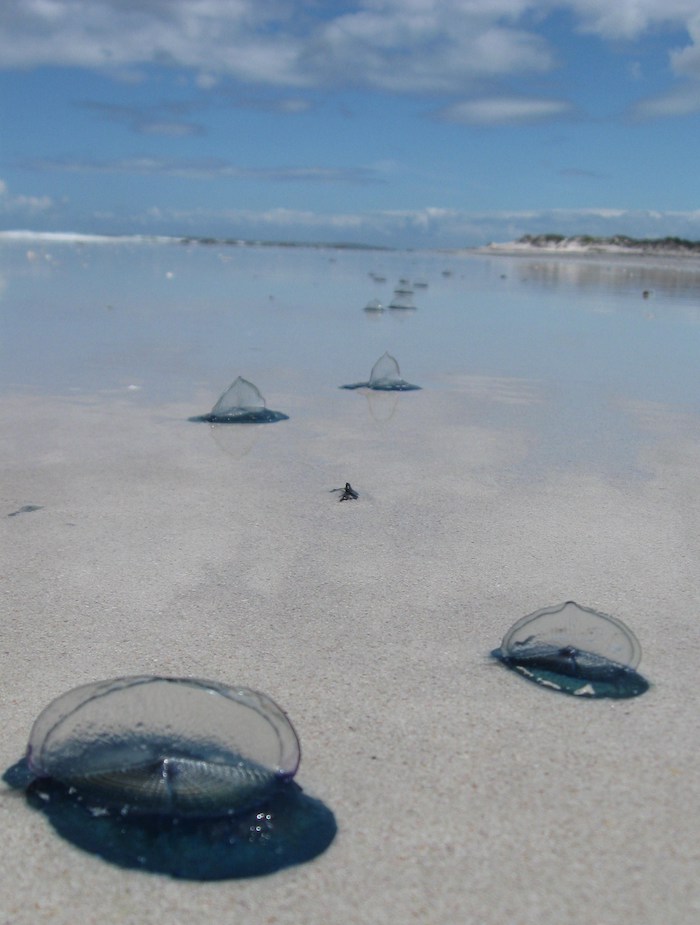 Bluebottle or Portuguese man-of-war Physalia physalis Its venomous tentacles can deliver a powerful sting used to paralyze small fish and other prey. The name “man o’ war” is taken from the man-of-war, a 16th century English armed sailing ship that was based on an earlier Portuguese vessel. The bluebottle is not actually a single creature, but a colonial organism made up of many minute individuals called zooids. Each of these zooids is highly specialized; they are attached to one another and physiologically integrated to the extent that they are incapable of independent survival.

Many species prey on the bluebottle and are either too thick skinned to be affected by the sting, like loggerhead turtles, or amazingly immune like the sea swallow which consumes the whole organism selecting the most venomous nematocysts for its own use. 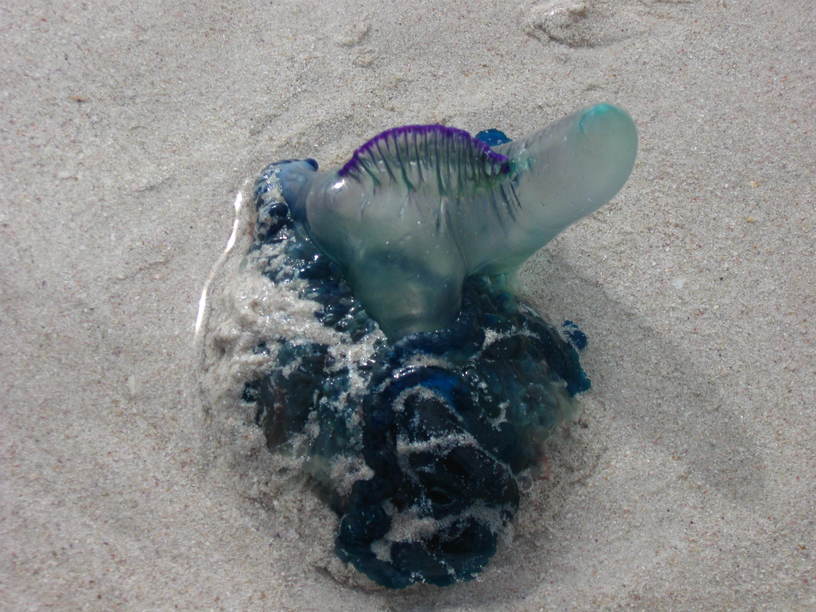 The Bubble-raft shell Janthina janthina thin fragile mollusc has no operculum (trap door) in the adult stage, secretes a mucus-coated bubbles from the  foot from which it floats upside-down. They often found in large numbers drifting on the surface of the ocean, where they feed upon pelagic hydrozoans, especially the by-the-wind sailor and the Portuguese man o’ war. 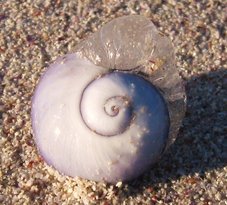 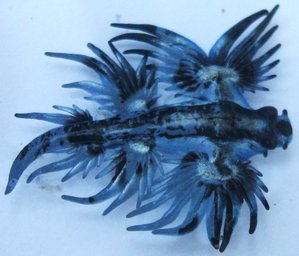 The Sea swallow Glaucus atlanticus small-sized (up to 3 cm) blue sea slug, a pelagic aeolid nudibranch, a marine gastropod mollusc. silvery grey on its dorsal side and dark and pale blue ventrally this coloration is an example of counter shading, which helps protect it from predators from below, sides and above. This ferocious predator hunts larger pelagic organisms includingBluebottle’s, Bye the wind sailor and the Bubble-raft shell. Because Glaucus stores the venom of its prey it can produce a more powerful and deadly sting than the prey upon which it feeds. With the aid of a gas-filled sac in its stomach, . Due to the location of the gas sac the sea swallow lives an upside down life floating on its back. Like most sea slugs, it’s a hermaphrodite, containing both male and female reproductive organs.

The Blue button Porpita porpita also floats feeding on platonic animals the gas filled float is surrounded by skirt of short tentacles dotted with minute spheres carrying stinging cells which are mild and have no effect on humans.  Interestingly in this photo top right you can just make out what seems to be a juvenile sea swallow (only noticed after sample returned). 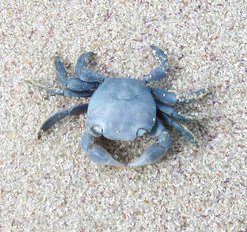 Columbus crab Planes minutus unmistakable shape of this arthropod was first noted by Columbus on his voyage to the West Indies, the crab is a pelagic species inhabiting either floating weed or more dynamic habitat of Loggerhead turtles. They feed on organisms floating in the weed or scraps left over from the turtle, however crabs using turtles as a host have a wider variety of diet due to the crab actively hunting off and on its host returning to the turtles before they move away.

Barnacles are highly modified crustaceans the adults are permanently attached and encased in series of shell plates; the legs have become long and hairy to comb the water for food. The eggs are brooded and expelled as tiny shrimplike planktonic larvae.

Two different types of barnacle occur these stalked barnacles living on floating objects and sessile acorn barnacles which have a conical shell attached to rocks or similar surfaces by a flat base. 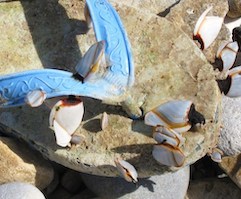 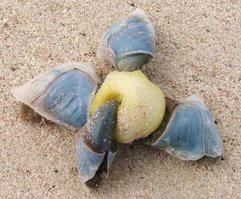 Yellow-rimmed goose barnacle Lepas anatifera is exclusively attached to floating objects by a tough fleshy stalk often found in dense colonies on ships hulls and buoys and large driftwood washed ashore where it desiccates and perishes. The common name originates form the medieval myth that these barnacles grew into barnacle geese.

Buoy barnacle Dosima fascicularis  is the only barnacle to produce its own gas-filled float by secreting a characteristic polystyrene-like floatation ball from modified cement glands in the base of the stalk. Other buoy barnacles attach to the float so colonies form. Juveniles sometimes found on other floating objects. like the other stalked barnacles it is carried along by ocean currents and has no propulsion in its adult stage.