When Neanderthal man was still ruling supreme in Europe, modern people were living in caves along this coast 85/100 thousand years ago. Evidence of this has been found in Klipgat cave in the Walker Bay Nature Reserve, one of the most important cultural assets in the Western Cape. We can visit this cave and see how the San’s way of life set the blueprint for our first steps out of Africa.  (important to realise that the total number of Homo sapiens was less than 5000 at this time)

Genetic and fossil evidence is interpreted to show that archaic Homo sapiens evolved to anatomically modern humans solely in Africa, between 200,000 and 150,000 years ago, that members of one branch of Homo sapiens left Africa by between 125,000 and 60,000 years ago, and that over time these humans replaced earlier human populations such as Neanderthals and Homo erectus.

The first human inhabitants of this region were the people generally referred to as San (sahn). The southern San, pure hunter gatherers, are culturally extinct; their surviving northern cousins refer to themselves as ‘Bushmen’. The acceptability of both terms is a subject of endless debate. Most of their languages are sadly extinct, but their linguistic influence survives in some names.

Archaeological evidence suggests that the Khoi (coy), distant cousins of the San, entered Southern Africa a little more than 2000 years ago. Pastoralists with flocks of sheep and later herds of cattle the Khoekhoen (Khoe-speakers) they probably clashed with the hunter gatherer San and this is reflected in Khoi names for some San groups, names that existed before European colonisation, such as Hawequas and Obiekwa (murderers) and even the name San itself ,with its variants Zonqua and Tanqua ( thieves, vagabonds). Many San were probably assimilated by the Khoi and by 1652 the remaining San were pretty much confined to the mountain vastness of the Cape, and it was some years before the Dutch encountered them. 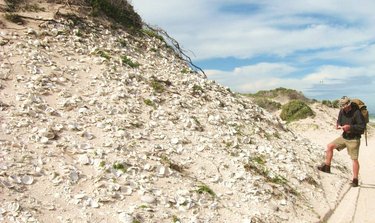 There is no written evidence of our ancient past and little investigative documentation from the colonists that arrived over the last 400 years but everywhere along this coastline there are heaps of shells and other debris that is the result of early people visiting the shore and collecting shellfish. These refuse dumps of ancient beachcombers give us an invaluable insight into tens of thousands of years of history, a priceless and fragile heritage resource. natural

Naturally made beach deposits also exist when stormy seas throw  heaps of shells and other debris high up the shore beyond the reach of normal high tides, over the millennia these heaps will weather and bleach until they may look superficially like a shell midden but the contents of a natural beach deposit will be different from a midden, Shell middens typically have only a few species, those preferred by people as food, only limited sizes of shells, those considered large enough to collect, and have a range of other materials such as bones, tools, wood charcoal that are rare or absent in natural shell accumulations.

Shell middens are protected by legislation, no private excavation is allowed.

Archiological excavations at Klipgat cave  proves that this site was occupied by middle Stone Age people from more than 100,000 years ago, uncovering stone tools in the early shell midden. There is then a period of absenteeism when the cave was filled with drift sand and again during the last ice age peaking 18,000 years ago when the planet was much colder and dryer when the sea level dropped as much as 130 meters and the coastline was more than a 100km from its present position but later stone-age people moved back into the area 10,000 years ago when sea levels returned to approximately present levels. With this return the bow and arrow was the preferred hunting weapon, shell beads and pendants were worn and artist created rock paintings (although non is evident in Klipgat cave) The last 2000 years the cave was used by Khoekhoe herders leaving sheep bones and earthenware pottery, at the time of  European contact the Khoekhoe living in the cave were the Chainouqua who were thought to have built the substantial fish traps that were later taken over and maintained by European settlers and fishermen.

However Based on the current evidence archival research was conducted to obtain as much info as possible about patterns of use of fish traps in historic times.  In addition, the reports on fish- remains from archaeological sites in the Western Cape have been re-evaluated. The results of the archaeological investigation indicated NO ASSOCIATION between the Later Stone Age middens and fish traps and none of the archaeological sites in the literature suggest fishing on a scale normally associated with fish trapping.  a pre-colonial age for the practice of fishing with stone–walled fish traps can no longer be entertained.

Abstract from P J HINE’S thesis on his MASTERS of  PHILOSOPHY in DEPT ARCHAEOLOGY at UNIV CAPE TOWN, 2008