The avifauna is diverse, with 230 bird species recorded from the Agulhas Plain. Of these, 11 are Red Data Book species and 133 are associated with the terrestrial environment.  Significant populations of Blue cranes and to a lesser extent the vulnerable Denham’s (Stanley’s) bustard Neotis denhami breed on the inland plains Nectivores (sunbirds and sugarbirds), important for lowland protea-veld pollination, are abundant.

The wetlands of the area support a diverse assemblage (> 60 species) of water birds   Over 21,000 water birds (i.e. about 9% of those in the Western Cape) occur at these wetlands, with the highest numbers at Soetendalsvlei, followed by Uilkraals River estuary and Voëlvlei The birds of the AP have been afforded international conservation recognition by the listing of two Important Bird Areas (IBAs), i.e. Overberg wheat belt and Heuningnes river and estuary system

The Cape Sugarbird, Promerops cafer, is one of the five bird species endemic to the Fynbos biome, the others being:

The staple diet of the Cape sugarbird is nectar; however, it will also eat spiders and insects. The characteristic strong winds in the Cape may make feeding off protea heads difficult, but the Cape Sugarbird has adapted to this with the development of sharp claws, the Proteas adaption is its stem is strong enough to carry this pollinators weight, as lightweight pollinators like butterfly’s struggle to fly in strong winds. 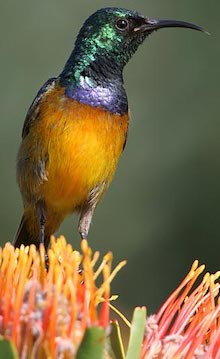 The breeding season for the Sugarbird and sunbirds is winter when there are ample food supplies.
The population is suspected to be stable in the absence of evidence for any declines or substantial threats.

Chances of seeing both these beautiful birds a few km inland where the best opportunities come from staking out the plant associated with the birds feeding, breeding and nesting and wait, usually not long before one turns up.

Extensive agricultural transformation 40 % of the AP is cultivated and associated habitat destruction has negatively affected many bird species, e.g. sunbirds, nightjars, and moosebirds. However, populations of certain bird species, especially granivores and omnivores, such as sparrows, larks and pipits, as well as Egyptian geese and Helmeted guinea fowl have proliferated on the AP.  Studies (Mangnall & Crowe 2003) on the effects of agricultural development on bird diversity on the AP and recorded the highest avian diversity at sites with a mixture of crops and coastal fynbos. However, all other agricultural regimes reflected a loss of diversity when compared with fynbos, and a small number of species, e.g. sunbirds, were exclusively reliant on coastal fynbos for survival. 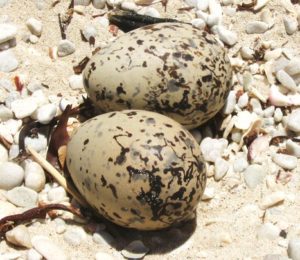 The African black oystercatcher Haematopus moquini endemic to southern Africa inhabits rocky and sandy shores, and sometimes estuaries and coastal lagoons. It prefers to breed on offshore islands and sandy beaches The coastal breeding site of the African black oystercatcher makes it vulnerable to human disturbance, particularly as the breeding season coincides with the height of the summer tourist season. This bird is gladly a regular sighting on any part of the hike often heard before seen.

Tread carefully the Oystercatcher lays highly camouflaged eggs in nothing more than a scrape in the sand above the high-water mark. The only time I’ve found nests is by accident and best avoided in breeding season September to March where birds are showing signs of distress when these areas are approached.

Dyer Island and Geyser Rock are important breeding sites for seabirds; notably the African penguin, which is classified as vulnerable and whose populations continue to decline The seabird species present and the size of their populations relative to their global populations are as follows:  African penguins (15%), Cape cormorant (13%), Crowned cormorant (9%), Bank cormorants (<2%), Kelp gulls (<2%) and at irregular intervals White-breasted cormorant (<4%), Swift terns (<2%) and rare Caspian terns (<2%)  African black oystercatchers (7%) and the rare Damara tern (<1%) breed along the coast. 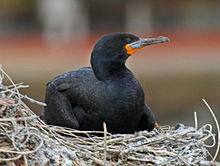 Cape Cormorant  Phalacrocorax capensis, is a bird endemic to the south-western coast of Africa. It’s the most abundant of the four spices of cormorant found in the area and likely to be seen on the hike often at rest on the rocky outcrops or in amazing v formations kilometres long flying  offshore. The largest, is the white-breasted cormorant although often feeds in bodies of fresh water is also a common site. 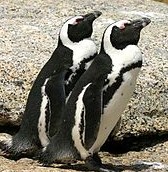 African Penguin Spheniscus demersus – unfortunately this bird is unlikely to be seen although it has happened on one walk. Its state of high vulnerability is due to a number of factors. Including depletion of food source, nesting material, and oil spills. Although egg collecting stopped in 1960s the massive impact of that and guano scrapping (used to burrow into for nests) reduced populations by 90% 1200 breeding pairs were counted on Dyer island in 2009 this number has declined since then. The wild African Penguin has a high risk of extinction in the medium-term future, classified by theWorld Conservation Union.

Cape Gannets Morus capensis – breeds only in southern Africa and so considered endemic. Depending on altitude, gannets hit the water at speeds of between 40 and 120 kilometres per hour, impact of hitting the water is absorbed by air cushions at the base of their necks. They have no external nostrils where the water could rush in. This spectacle is often seen when great shoals of fish are near the surface, often pushed there by unseen predators, like Dolphins. (see mammals) 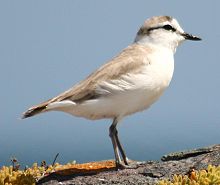 Whitefronted Plover Charadrius marginatus is endemic to sub-Saharan Africa and is the most common coastally-breeding wader species in southern Africa. Here it occurs in densities of up to seven or eight birds per kilometre, feeding on  fly larvae and amphipods that inhabit stranded kelp fronds but  known to take 28 different prey species. An interesting foraging technique which is known as ‘foot trembling’ which Brings prey items to the surface of the wet sand. Whitefronted Plovers remain faithful to their territories for years,these delightful birds are see on every stage of the walk.

Three species of gulls can be seen soaring above the waves or scavenging noisily on the coast of South Africa. These are the Kelp Gull, Hartlaub’s Gull and the Greyheaded Gull. The Greyheaded is seldom seen on the coast but thrives on wetlands inland. Gulls have well adapted to human habitation following fishing boats, populations can now be found far from the sea feeding on rubbish dumps and terrestrial invertebrates.

Several species of Terns are seen on the walk they have slender pointed bills used for skewering prey, more delicate than gulls. They are mostly seen at rest on the rocky shore but sometimes the spectacle of them plunge diving using that beak to capture fish is observed this the Swift tern Sterna bergii which is a year round resident. 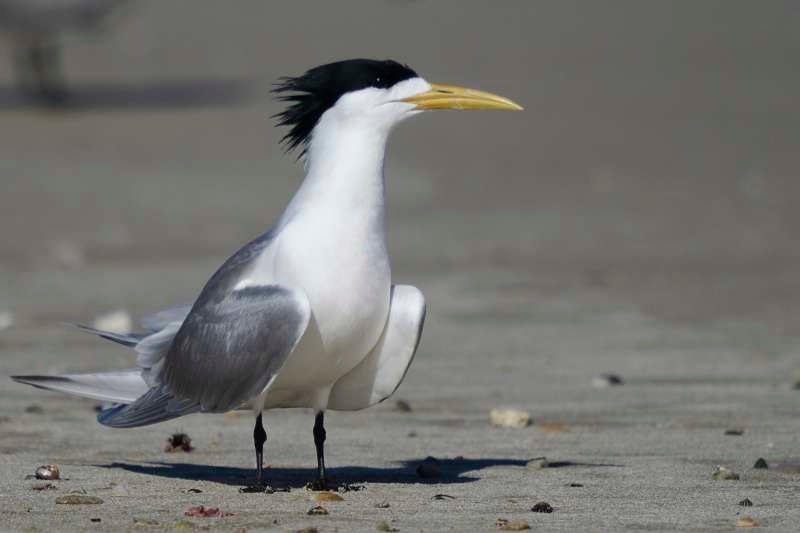 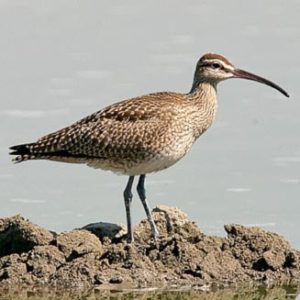 The Common Whimbrel (Numenius phaeopusis) is one of the many migratory birds to visit in summer (occasionally overwinters here) and it’s always nice to see the first ones arriving in spring returning from Siberia and Russia where they breed. The Whimbrel’s specialised beak indicates food preference, diet consists of crabs mudprawns and Polychaetes (bristleworms, about 800 species in Southern Africa).