What type of crab is that? 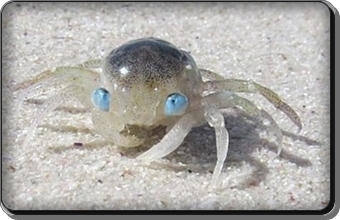 It’s not often that I come across something that baffles me on the sea shore, and so I lay down the challenge to my hiking guests to ask questions about our environment and if I don’t know the answer my promise to them is to find out and get back before the end of the trail or via e-mail. This bold statement has put me in some difficult spots often taking months to get to the bottom of the mystery but this is after all the best way to learn.

The other possibility is we may stumble upon a new species which is not as unlikely as one would think! Science has identified some 2 million species, scientists estimated there are millions more left to discover, and new species are constantly being discovered and described.

Unfortunately this is not new and can’t be named the Blue eyed Beachcomber! This is the megalopa larval stage of a crab – the last stage before it moults into a juvenile that looks like the adult stage. The give-away is the abdomen, which is still segmented and relatively large. It is still difficult to pin down the species, either army crab Dotilla fenestrata (from the general shape), or Columbus’ crab Planes minutus, which does have short blue eyes (and a blue body) in the adult stage.

Big thank you for the help towards identifying this little guy.